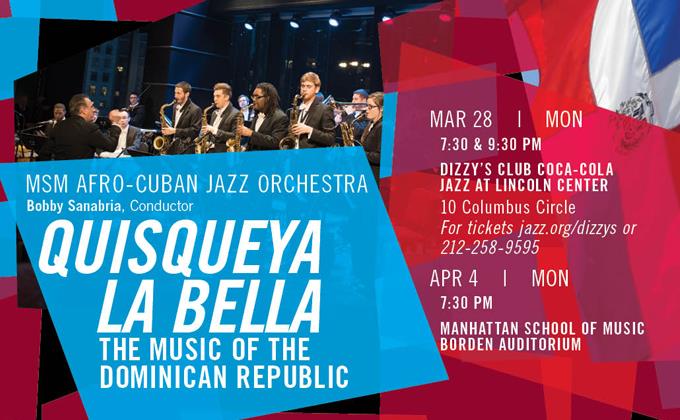 QUISQUEYA LA BELLA:
A Celebration of the Music of the Dominican Republic

QUISQUEYA LA BELLA (“the beautiful Dominican Republic”) features the many flavors of the D.R., from the intense gallop of the popular merengue and pambiche to the romantic bachata and the Afro-centric carnival celebrations of gaga, palo, and more.

The orchestra will also celebrate the upcoming 95th birthday on April 22 of Maestro Candido Camero, NEA Jazz Master and father of modern conga drumming; in a special appearance, Camero will join the orchestra on stage in performance.

On April 4, at Manhattan School of Music’s Borden Auditorium, the orchestra will feature the New York premiere of Dr. Socrates Garcia’s DOMINICAN SUITE for JAZZ ORCHESTRA and VANTAGE POINT.

The suite is a tour de force multi-movement composition that explores Dominican rhythms such as merengue, pambiche, bachata, and palo, all under the rubric of the modern jazz big band, highlighted by forward-thinking modern harmonies and jazz arrangements.

A highlight of the piece features an exceptional solo adapted by the legendary Dominican alto saxophonist, Tavito Vazquez, arranged by Garcia for the entire sax section.

● Dizzy Gillespie’s groundbreaking 1946 composition THINGS TO COME gets the “Sanabria treatment,” cast as a blistering merengue dedicated to another legendary Dominican musician, tenor saxophonist Mario Rivera, a mainstay of New York City’s salsa and jazz scenes from the 1960s to his death in 2007.

● The concert is dedicated to Rivera along with Dominican saxophonist Tavito Vazquez  both of whom raised their instrument to new heights.

Bandleader and seven-time Grammy nominee, drummer, percussionist, composer, arranger, educator, documentary film producer, multicultural warrior, and activist, Bobby Sanabria is a native Nuyorican born and raised in New York’s South Bronx. His unique perspective comes from having performed and/or recorded with every major figure in the development of what today is known as Latin jazz. From the genre’s acknowledged creator, maestro Mario Bauzá, for whom Bobby recorded three Grammy-nominated CDs and worked as the drummer in his Afro-Cuban Jazz  Orchestra for ten years, to Mongo Santamaria, with whom he started his career, to Tito Puente, Chico O’Farrill, Ray Barretto, Larry Harlow, Candido, Dizzy Gillespie, Marco Rizo, and many more.

Mr. Sanabria’s versatility and scope of musical influence as both a drummer and percussionist has extended to other forms of music. He has worked with such genre-bending artists as composers David Amram, Henry Threadgill, and poet Sekou Sundiata, as well as being named last year as the newest member of Max Roach’s legendary percussion ensemble, M’BOOM. A noted educator, clinician, and educator, he is on the faculty of Manhattan School of Music and of the Jazz & Contemporary Music Program at the New School and directs both schools’ Afro-Cuban jazz orchestras. He received Grammy nominations for the recordings Kenya Revisited Live!!! (2009), a masterful tribute and re-working of the Machito Afro-Cubans’ legendary Kenya album, and Tito Puente: Masterworks Live!!! (2011) as the director of the MSM Afro-Cuban Jazz Orchestra. He has worked as a producer, advisor, and on-air personality on the award-winning documentaries, The Palladium Where Mambo Was King (Bravo, 2003), From Mambo To Hip Hop (PBS, 2007), Latin Music U.S.A. (PBS, 2009), and the soon to be released I Like it Like That: The Story of Latin Boogaloo (2015). He is the Co-Artistic Director/Curator of the Bronx Music Heritage Center and the Artistic Director/Artist in Residence of the Roberto Ocasio Memorial Latin Jazz Camp for High School Students in Cleveland, Ohio. Mr. Sanabria is a graduate of the Berklee College of Music, where he received his Bachelor of Music degree in 1979. He proudly endorses TAMA Drums, Latin Percussion Inc., Vic Firth Sticks, Sabian Cymbals, and Remo Drumheads. His latest recording is the double Grammy nominated Multiverse (2012) on the Jazzheads label, featuring his 19-piece big band.

ABOUT DR. SOCRATES GARCIA
Socrates Garcia is a composer, arranger, producer, recording engineer, guitarist, and educator from the Dominican Republic. He is the Director of Music Technology at UNC, where he teaches courses in music technology such as Introduction to Music Technology, Digital Composition, and Recording Techniques. He also oversees the recording studio, keyboard lab, and computer music lab.

Dr. Garcia’s credits include the album Yo Por Ti by Puerto Rican artist Olga Tañon, Grammy Award winner of Merengue Album of the Year 2001; musical director/keyboardist for Los Ilegales in their 1997-1998 Latin American tour; keyboardist for multi-Grammy winner Juan Luis Guerra; and guest performer with the Dominican Republic’s National Symphony Orchestra, among others.

As a guitarist or keyboardist, he has performed in many Latin-American countries, including Mexico, Colombia, Venezuela, Bolivia, Costa Rica, Aruba, and throughout the Dominican Republic. As an arranger/producer and recording engineer his work is found numerous albums and a myriad of side projects. His first solo CD, Sueños, was released in 2005.

ABOUT NACHO GONZALEZ
Nacho González Nappa is a Uruguayan musician and social entrepreneur. Born in Montevideo (1985), Nacho is passionate about Afro Uruguayan music, Jazz and Tango. He studied and performed with the best musicians in Uruguay and 2013 he began studying Jazz Composition at Berklee College Music. Besides music, Nacho spent 8 years working in the social sector, and is the co-founder of techo.org in the U.S. and socialab.com, two of the largest and most effective poverty reduction efforts in Latin America. He is also a journalist, and worked for many years as a literature reviewer at El Observador newspaper.

ABOUT CANDIDO CAMERO
So well known and respected, his first name alone — Candido — is all that is necessary for jazz aficionados to know who he is. Credited with being the first percussionist to bring conga drumming to jazz, Candido Camero is also known for his contributions to the development of mambo and Afro-Cuban jazz.

Born in Havana, Cuba, in 1921, Camero first began making music as a young child, beating rhythms on empty condensed milk cans in place of bongos. He worked for six years with the CMQ Radio Orchestra and at the famed Cabaret Tropicana. He came to the United States in 1946 with the dance team Carmen and Rolando, and very soon after was playing with Billy Taylor, who wrote in 1954, “I have not heard anyone who even approaches the wonderful balance between jazz and Cuban elements that Candido demonstrates.”

By the early 1950s, Camero was a featured soloist with the Stan Kenton Orchestra, with whom he toured the U.S. playing three congas (at a time when other congueros were playing only one) in addition to a cowbell and guiro (a fluted gourd played with strokes from a stick). He created another unique playing style by tuning his congas to specific pitches so that he could play melodies like a pianist. He became one of the best known congueros in the country, appearing on such television shows as the Ed Sullivan Show and the Jackie Gleason Show.

He has recorded and performed with seemingly everybody in the jazz field, including such luminaries as Tony Bennett, Miles Davis, Dizzy Gillespie, Lionel Hampton, Slide Hampton, Charles Mingus, Wes Montgomery, Gerry Mulligan, Charlie Parker, Sonny Rollins, and Clark Terry. Among his many awards are the Latin Jazz USA Lifetime Achievement Award (2001) and a special achievement award from the American Society of Composers, Authors and Publishers as a “Legend of Jazz” (2005).

The subject of the 2006 documentary, Candido: Hands of Fire, Camero (in his 90s) continues to perform throughout the world.

ABOUT MSM AFRO-CUBAN JAZZ ORCHESTRA
The multi-Latin Grammy-nominated MSM Afro-Cuban Jazz Orchestra, under the direction of Bobby Sanabria, has been internationally recognized for its recordings on the Jazzheads label as well as for performances at prestigious jazz conferences. In October 2012, the orchestra honored the Greater Harlem Chamber of Commerce with a concert that celebrated current and past performance venues that have called Harlem home. In 2009, they released the critically acclaimed Grammy- nominated CD, Kenya Revisited Live!!! . This recording, also featuring NEA Jazz Master Candido Camero, is from a historic concert held at MSM (2008) that celebrated the 50th anniversary of Machito & The Afro-Cubans’ 1957 jazz masterwork, Kenya. In 2011, the MSM Afro-Cuban Jazz Orchestra under Maestro Sanabria’s leadership released the critically acclaimed Latin rammy nominated CD, to Puente Masteworks Live!!! Audiophile Audition said about the recording, “The Manhattan School of Music Afro-Cuban Jazz Orchestra is unrecognizable  as a student ensemble … the soloists are of such a high level that none of them emerge as more memorable than the others.”

The MSM Afro-Cuban Jazz Orchestra and Bobby Sanabria have performed sold-out shows at Jazz at Lincoln Center’s Dizzy’s Club Coca-Cola and in NYC jazz venues such as Birdland and the Jazz Standard, as well as on the plaza of the Harlem State Office Building. Guest artists who have appeared with the ensemble include NEA Jazz Masters Ray Barretto and Candido Camero, Sonny Fortune, Tom Harrell, Arturo O’Farrill, Ronnie Cuber, and David Sanchez, among many others.

The MSM Afro-Cuban Jazz Orchestra and Bobby Sanabria are dedicated to performing the music of ‘la tradición,’ paying homage to these legends while continuing to pass on and advance the tradition to the next generation. Bobby Sanabria and the MSM Afro-Cuban Jazz Orchestra’s latest CD, ¡Qué Viva Harlem! was released on the Jazzheads label on April 8, 2014.

ABOUT MSM JAZZ ARTS
Manhattan School of Music is one of the first conservatories in the United States to acknowledge the importance of jazz as an art form by establishing undergraduate and graduate degree programs in jazz. It is also one of the richest programs of its kind, thanks to systematic and rigorous conservatory training combined with a myriad of performance and networking opportunities in New York City. In addition to a variety of small combos, student ensembles include the Afro-Cuban Jazz Orchestra, Concert Jazz Band, Jazz Orchestra, Jazz Philharmonic, and Chamber Jazz Orchestra. Under the leadership of longtime faculty member and eminent jazz artist-and-educator Justin DiCioccio, the program strives to produce students who perform, compose, and teach with equal facility and passion.

ABOUT MANHATTAN SCHOOL OF MUSIC
Founded as a settlement music school by Janet Daniels Schenck in 1918, today Manhattan School of Music is recognized for its more than 950 superbly talented undergraduate and graduate students who come from more than 50 countries and nearly all 50 states; a world-renowned artist-teacher faculty; and innovative curricula. The School is dedicated to the personal, artistic, and intellectual development of aspiring musicians, from its Precollege students through those pursuing postgraduate studies.

Offering both classical and jazz training – and, beginning in fall 2016, a Bachelor’s degree program in musical theater – MSM grants Bachelor of Music, Master of Music, and Doctor of Musical Arts degrees, as well as the Professional Studies Certificate and Artist Diploma. Additionally, true to MSM’s origins as a music school for children, the Precollege program continues to offer superior music instruction to young musicians between the ages of five and 18. The School also serves some 2,000 New York City schoolchildren through its Arts-in-Education Program, and another 2,000 students through its critically acclaimed Distance Learning Program.